Why the opinions of young people matter for us?

“Hope For Children” CRC Policy Center has held a series of meetings with children aged 14 to 18 years in the framework of the EU funded project CONVEY to discuss the development of an online simulation game, which aims to educate and contribute to a positive change in young people’s behaviours and attitudes towards sexual violence, harassment and gender stereotyping. We interviewed the CONVEY researcher in Cyprus about the experience of implementing and moderating these peer consultation groups. 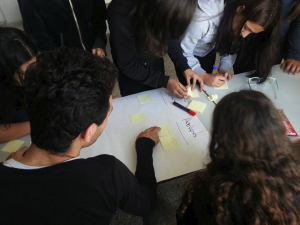 Why consulting the young peers is important for the success of this project?

“Peer consulting with a group of children aged 14 to 18  is an important methodology used   in the implementation of the project’s activities. We are using this participatory method in order to include the teenagers in the process of designing and shaping the game creation process. This will support and sustain the project’s results long-term as it will take into account the opinions of future users. In other words, we want to find out , first hand, their views and of course, to have an idea of what they are thinking at that age, and to establish an open communication that allows for their understandings, tips and ideas to be efficient inputs to the project.

We organised three sessions with the same group of young people from a high school in Nicosia.. Each session was 2 hours, though in some sessions we could have continued for a couple of hours more, because of the participants’ enthusiasm and interest to get to know more on the main topic!”

To what extent was this group of high school students aware of issues related to sexual violence and harassment?

“I was a bit amazed with the fact that they knew the meaning of the terms in use. Even more, they  could provide some examples when I asked for it. It was a good surprise in the sense that they already had an idea about the main topic, so it was easy for us to continue the exercises, the games, all the activities included in the guidelines for implementation.

They were familiar with the terms sexual violence and sexual harassment, but in more simple words. For example, they didn’t use terms as “sexual harassment”, but they understood what it is, even if they define it in different words, as annoying behaviours, or intrusions of one person against another person in different contexts like school or workplace.”

Did they show interest in addressing sexual violence and harassment and being part of the development of the project, and the game concept?

I was also amazed by the fact they were willing and keen to participate and they were engaged in the conversation from the first meeting. They liked the idea of a game to educate and fight sexual violence and interested for young people who are going to use the game, to relate to specific characters and to address this type of violence in such a way.

Some of the participants even expressed their emotions during some activities. In one of them, each person was given a specific card which couldn’t be showed to the others. They had to imagine they were the person described on the card. At the end of the game, I asked them how they had felt, if they could be in that imaginary’s person’s place, etc. That game proved to be the most emotive.

They were eager to contribute to the development of the game and were very interested and active in trying to give us ideas and inputs on how to design the game to be more attractive for the player.

What was the general attitude of the participants?

They were excited. They asked me every time for the next session, so they could keep being part of the next activities, proving their strong interest.

They loved the activities where they had to assume some imaginary roles. They specially enjoyed the last part, when they have to write their own script and develop a story about the game.

They connected some of their answers to things they had seen in the movies, experiences of their friends, etc. However, some also spoke about very close situations and, at moments, revealed  experiences very close to them. Specifically, a girl talked about an episode experienced by her mum.

Mostly girls shared these experiences and feelings, but all of them were keen to follow the guidelines of the next activities.

It was most impressive to actually see they were interested to create and bring their honest input in this process. They cared to listen and learn from me and their peers. 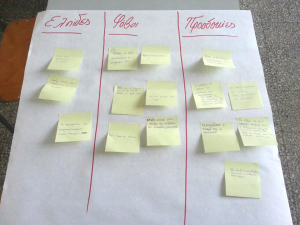 What did you learn from this meeting?

I learnt a lot from these meetings. I liked that I worked with this age group, young people 17-18 years old. I found this age appropriate for the target group of CONVEY project. They can understand the terms, , but also they can benefit of new knowledge which could be determinant in some moments of their future life.

I learnt how the children want to know, and as much as possible, everything about sexual violence and harassment. They all wanted to  KNOW! Most interesting was the mixture between objective knowledge and stereotypes which they heard from their parents, their friends, the television, etc. However, it was refreshing for them to realize new concepts and definitions. The discussion was important to complement their first knowledge in order to have a big picture of sexual abuse and harassment.

For the creation of this online simulation game is important to have in mind the first step is to focus on the process on gender stereotypes awareness to combat the phenomena of sexual violence and harassment. Especially among young people. It is good for them to identify with the role of the victim and be in their shoes in order to empathise with the situation. When they actually experience how to create, develop the game’s concept, they better understand the subject and, hopefully, in the future they will stop or minimize specific prejudices around these terms and the meaning of them.

By last, what were the students’ recommendations regarding the consultation process ?

They gave me suggestions and recommendations for the game.

The most important issue to address, according to the peer consultants is vocabulary, which should be simple phrasing and usual words, even jargon that they use daily. The second, the rich use of images, audio-visual content should stimulate the viewer to keep playing the game. Finally, the inclusion of examples and tips which could be useful for real life situations. For instances, if a young person wants to inform the police or request information, it would be useful to have an option of “help” in the game, to guide users in finding, and learning about, support services.

This project involves 6 partners from different European countries: CESIE (Italy), The Smile of the Child (Greece), “Hope For Children” CRC Policy Center (Cyprus), Sexual Violence Centre Cork (Ireland), Gender Alternatives (Bulgaria) and Westminster City Council (United Kingdom). All the partners are holding meeting with young peer consultants in their countries in order to get as many recommendations and feedback from the teenagers. The proposals and results obtained will be gathered by a coordination team, which will work with the game developer. Together we expect to create an appropriate and appealing online educational simulation game to fight sexual violence and harassment.